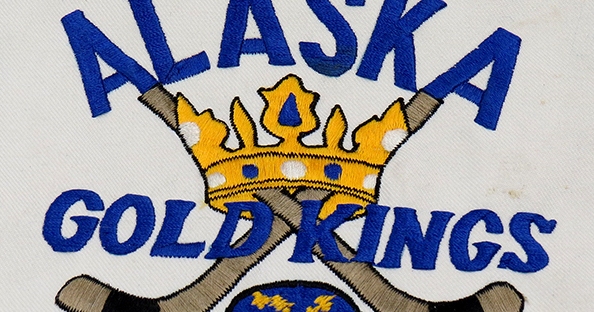 Over the past year I’ve had the good fortune to work with another talented UAF graduate student. Sam Urban is finishing his M.A. in Arctic and Northern Studies and has spent the past academic year working in the Ethnology & History lab to process the John Rosie Alaska Gold Kings collection donated by Randy Zarnke. Sam, who is a self-proclaimed hockey nut, happened to be looking for an Alaska sports-related topic for his thesis when the collection came to the University. As is often the case, the stars aligned and he shared his expertise with the Museum by cataloging the collection and using the materials as key elements of his M.A. project. After COVID-19 restrictions are lifted in Alaska we will install his physical exhibit at the UAF Rasmuson Library.

Certainly there’s money to be made by any group that can successfully and economically put a semi-pro Fairbanks team on the ice. But the prospect of making it big from the start defies any get-rich-quick scheme. “We just don’t want to start out in a position of having to fold right in the middle of the season,” Atwood said.

Will it work? Rome wasn’t built in a day and neither were the Detroit Red Wings. The lack of an arena where the spectators can watch comfortably makes the plan an iffy prospect for rapid success. Still, the promoters feel hockey has a definite future here and foresee in their crystals the community interest to make it work.

Wanting a higher level of hockey for local youth to aspire to, city hockey officials created the semi-professional Teamsters hockey team in 1975. The team was initially comprised of the best local recreational players, many of whom relocated to Fairbanks to work on the TransAlaska Pipeline from the upper Midwest and Seattle. Two years later the team took on the name Fairbanks Gold Kings (later changed to the Alaska Gold Kings), and quickly began proving itself against teams from Anchorage and the Pacific Northwest.

From 1975 to 1995 the Gold Kings were an amateur senior men’s team, and from 1995-1997 they spent their last two Fairbanks years in the professional minor league West Coast Hockey League. Between its inception in 1975 as the Teamsters, and in spite of its relocation to Colorado Springs in 1998 as the Alaska Gold Kings, Fairbanks’ team was a huge success. The Gold Kings won five national championships, played 16 different international and Olympic teams, played overseas in Asia and Europe on multiple occasions, and laid the foundation for the level of hockey found in Fairbanks today.

A hallmark of Gold Kings hockey were the international hockey games they hosted in Fairbanks and participated in abroad. The Gold Kings hosted their first international invitational in March of 1985. The Big Dipper played host to the national teams of the Netherlands, Austria and Japan.

I could never in my mind, when we dropped the first puck in the old Big Dipper, did I ever believe that the stuff we accumulated over time would ever warrant the status of a museum exhibit.

In the spring of 2019, University of Alaska Museum of the North Ethnology and History Lab director Angela Linn was asked by Randy Zarnke if the museum would be interested in a collection of items and documents from the Gold Kings’ past. Zarnke is the president of the Fairbanks Hockey Hall of Fame, and author of Fairbanks Hockey Pioneers: A Tribute to the Hockey Community in the Golden Heart of Alaska. While some of the items belonged to fans and players, much of the collection was once in the possession of former team president John Rosie. According to Fairbanks Daily News-Miner coverage of the ceremony celebrating the collection on March 8th, 2020: “The collection comes from John Rosie, president of the Gold Kings. After the Gold Kings folded in 1997, Rosie was on the phone with Zarnke, talking about the items that are now being catalogued in the museum collection. He was initially going to take them to the dump, according to Zarnke, but Zarnke told Rosie to give the items to him instead,” (Kyrie Long, “Alaska Gold Kings reception: UAMN hosts, receives memorabilia donations,” Fairbanks Daily News-Miner, March 9, 2020).

For more information on the Gold Kings and Fairbanks hockey, visit: