Museums acquire collections in many different ways. Our database lists the following modes of acquisition: Bequest; Collecting Expedition; Donation; Exchange; Fieldwork; Grant; Loan; Purchase; Transfer; and the ever-present “Undetermined” and “Various”. When the “Donation” line is selected, it often belies the true nature of the relationships that may have been established over years of communications and interactions. Just such a relationship has sadly come to an end with the passing of our dear friend Dr. Robert Lathrop, DDS. Bob was a dentist who worked in northern Alaska, starting in the 1950s, and made such a strong connection with the people in those Inupiaq communities, that he lived off the land with them, sharing their values and activities. He and his wife Petey learned the ways of the people who they served, and as such, were accepted into the communities rather than being considered just visitors.

I first interacted with Bob in 1997 while I was a graduate student working in the lab. He and his wife Petey had just made a MAJOR donation of 109 objects to the Ethnology & History department. Bob was also in the process of cleaning out a property he owned in Kotzebue, so my co-worker in the lab, Christopher Hrycko, had the extreme luck of traveling to Kotzebue to help Bob pack up some of his gear. My role was to help process that collection when it came to the museum, cataloging and organizing the objects and information.

The first thing that struck me was Bob’s attention to detail and his meticulous hand-written notes. Doctors are renowned for their horrible handwriting… apparently this does not hold true for some dentists! Bob’s writing was amazing – written with ruler-straight lines and margins, a slight angle, and a unique combination of upper and lower-case letters – full of details and heart-warming commentary. I LOVE reading Bob’s letters, lists, greeting cards, captions… anything. 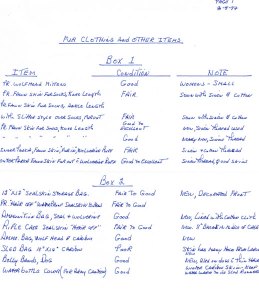 An example of one of Bob's inventory lists.

In 1998 I was fortunate enough to visit Bob and Petey in their home in Anchorage, along with my then graduate advisor, Molly Lee. There we shared a cup of coffee and lots of stories, and began a friendship that continued for over a decade. In 2000, Bob and Petey donated three items – a lynx parka was added to our permanent collection and a pair of boots and a sealskin bag were handed over to the education department for their hands-on collection. They were delighted that these items would be shared directly with area school children through our educational programs.

In 2001, my curator, Molly Lee, and I had the EXTREME pleasure of finding out that Bob and Petey were interested in donating the bulk of the ethnological items that they had collected during their life in “Arctic Alaska.” This turned into a 2 day road-trip to Anchorage in the Museum truck where we worked with Bob and Petey as well as a local appraiser, Joe Crusey, to evaluate, get the stories of, and pack what ended up being 333 objects. These pieces ranged from dozens of small ivory carvings (around 87 of them in fact!) and walrus tusk cribbage boards, to beautiful and functional tools of daily life. Over the next few years, Bob made several donations, totaling another 52 items.

Petey passed away January 26, 2003 in Anchorage. Molly and I continued to correspond with Bob, visiting him whenever we traveled to Anchorage. In 2004, Bob made the most generous and amazing gift so far – he established a University endowment to support the Ethnology & History department, with priorities of paying student salary, of purchasing Inupiaq artifacts, of conserving collections, and for any further general support of the department.

The more time I spend working with the Lathrop collection, the more I value people like Bob and Petey Lathrop and realize how very lucky our department is to have made a connection with them. Molly Lee established that true friendship with Bob and Petey and helped me to continue the process as well. I learned from her that it’s not just about getting the “stuff” and the “money” but it’s about the relationship-building that happens and how we are changed through those relationships. By learning about the people and the lives they lived while making and wearing and using these incredible artifacts, we are better able to preserve and interpret them for present and future generations. Generations who might never see work like this anywhere else.

Some of the hand-made Inupiaq artifacts from the Lathrop collection. Photo by Barry J. McWayne. Copyright UAMN.

When we received the news of Bob’s passing from Bob’s long-time-friend Harry Harvey, it was truly a sad day. The only positive being that now Bob could re-join the love of his life, Petey. When I attended the memorial service with my colleague and former head of Development at UAMN, Emily Drygas, I was surprised to feel the bubbling up of such strong emotions that I could barely tell my story of knowing Bob and Petey.

So many students have been supported through these generous friends. Countless visitors have been enlightened about the creativity and ingenuity of the Inupiaq people because of the hundreds of objects they donated. And we will continue to tell the story of the Lathrops, because it is our job (and pleasure!) to preserve these objects and their stories in perpetuity.

One thought on “The Passing of a True Friend”